I have seen the face of the beast. His name is…well I won’t say his name, but it rhymes with BitiDank. I have had this one particular card for years now and it has been nothing but a huge pain in my nether-yaiya.

The damned thing has gone shopping without me on more than one occasion, while I was at work. It happened again only a month after I got a new card because the old one was hacked. I don’t even carry it and I don’t use it online either. I have other cards and they are just fine. The hacking has only happened with this one card company and on numerous occasions, but it’s not holes in their security, oh nooooo. It’s my fault. Yea right, and monkeys fly out of my butt on a daily basis too.

Now after a year of it rotting in my file cabinet. I get a snooty little phone call about an outstanding balance, again. The statements don’t come in the mail even though the nice little man in Bangladesh insists that they do. Why didn’t I close the account. Because I fell into the “it will effect your credit score” trap. What a racket. Sucker! 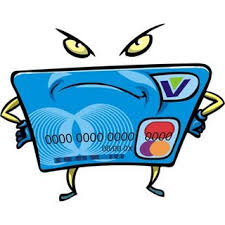 The card companies tell you that if you don’t have high enough score than they will charge you more when you do want a card. Bull cookies! I told them to close the account. Silly me. Now I can’t pay the balance online, because they closed it while I was talking (well, yelling) at them before I paid the piddly little outstanding  balance.

This is the only time in 5 years that a charge is actually mine. (a forgotten game subscription) Now I’m supposed to send them a check in the mail with all kinds of information on it, probably including what kind of toothpaste I use and DNA sample from my first-born child. But not to worry, they will send confirmation of account closure in the mail. This document will end up in that same alternate universe where the statements go. The probable result of this is that the only person who CAN’T use the card is me. I just pay the bill when I know one is due via my crystal ball, Ouija board, or ecstatic vision.

The only reason I keep credit cards is because I like to travel. If I tried to do it all with cash I would look like I was pregnant from having it stashed all over my body. And my money would get all sweaty. Eeww. OK. I like to shop online too. I’m not going the PayPal route because that service gets and hacked and whacked more than weeds on the side of an interstate. I hate credit cards, but cash is bulky. Just one of those conundrums of life. I guess it better than hauling around boxes of clam shells or a herd of goats, but not by much.